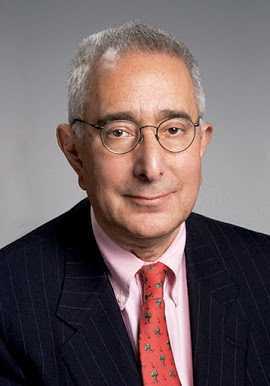 In real life, Ben Stein is a powerful speaker on economics, politics, education, and history. Like his father, Herbert Stein, he is considered one of the great humorists on political economy.

Stein has a bachelor’s with honors in economics from Columbia, studied econ at the graduate level at Yale, and is a graduate of Yale Law School (valedictorian of his class by election of his classmates in 1970).

Ben Stein is morally committed to making your meeting a success and utilizing his extensive background to bring out the funniest and most powerful trends in current history.

His background includes being a poverty lawyer for the poor in New Haven, a trade regulation lawyer for the FTC, a speech writer for both Presidents Nixon and Ford (He did NOT write the line, “I am not a crook….”), a columnist and an editorial writer for The Wall Street Journal, and a teacher of law and economics at UC Santa Cruz (undergrad) and Pepperdine (law school and undergrads).

He has written or co-written roughly 30 books with his brilliant colleague Phil DeMuth. Most of these books concentrate on investing, and many have been New York Times bestsellers. Their book, Yes, You Can Time The Market, has become a landmark of using price theory for securities market analysis.

He wrote a column about economics for The New York Times for several years, roughly 2004-2009.

He co-hosted the show “Win Ben Stein’s Money” with Jimmy Kimmel, which won seven Emmys, including best game show host. (Surely making him the only well known economist to win an Emmy….). Presently, he writes a column for The American Spectator and for NewsMax, and is a regular commentator on Fox News and on CBS Sunday Morning, as well as a frequent commentator on CNN.

He lives in Los Angeles with his wife of 45 years, Alexandra, two dogs and six cats.